Animal rights and environmental advocacy are two of my major passions in life, but – as anyone who strives to raise awareness of these issues will know – talking about them can be demoralising. Whenever I speak or write about these issues, I strive to remain optimistic, spread the word about positive developments, and share stories about individuals and groups who are making a genuine difference in their communities. With that in mind, I wanted to put together a post about people whose deep commitment to dismantle both human and non-human oppression, and ultimately build a better world, has moved and inspired me.

Food security – the matter of simple access to an adequate amount of nutritious food – is enormously difficult for far too many people. The United Nations’ Food and Agriculture Organization (FAO) estimates that about 795 million people (close to one-ninth of the world’s population) suffered from chronic malnourishment during 2014 to 2016. In the U.S., an estimated 42.2 million people were estimated to be living in food insecure households in 2015. Recent initiatives to improve this sobering statistic have focused on bringing higher-quality nutrition to poverty-stricken areas and advocating for a more equitable and fair food system.

Urban farming is one notable trend that has arisen in response to the problem. 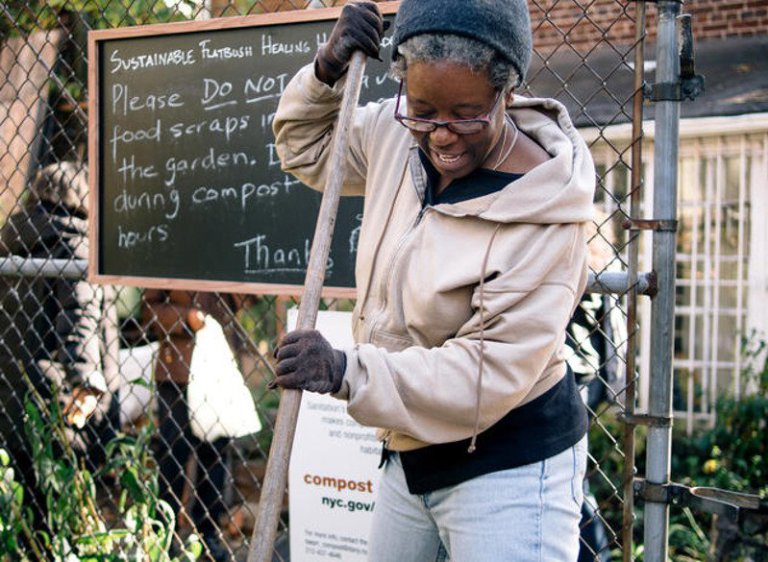 Urban farming projects aim to provide local residents with high-quality produce, while also giving them a much-needed boost in confidence through their involvement with the schemes. Two notable examples are Grow City in San Francisco, California, and Detroit Dirt in Detroit, Michigan. On a global level, urban farms now feed an estimated 700 million city dwellers and supply around 15 percent of the world’s food.

Sheryll Durrant is one urban farmer whose dedication and passion really stands out to me. She grew up as a farmer’s daughter in Kingston, Jamaica, before moving to New York City in 1989. After earning an undergraduate business degree and working in the marketing sector for nearly twenty years, she decided to leave her job in 2008 and try volunteering at a community garden in her Brooklyn neighbourhood. For her, this decision marked a return to her roots: reminding her of the days when she would help her parents to harvest fresh fruits and vegetables. In an interview with the Natural Resources Defense Council (NRDC), she said, “I would plant flowers or melons, and that sense of putting your hand in the soil and becoming a part of that green space flooded back to me.”

Durrant soon threw herself wholeheartedly into her local urban gardening movement, initially working with the Sustainable Flatbush group, before moving to an area of high food insecurity in the South Bronx. Durrant explained that stores in the area seldom carry nutritious, fresh produce, due to a lack of turnover: “If I have a limited amount of income, why would I waste my money or benefits on food that is going to perish in no time – that’s already rotted when I get there?”

Durrant is currently the garden manager of the 2,500-square-foot Kelly Street Garden. This garden produced 1,200 pounds of free food in 2016. She also works as a seasonal farm coordinator at the International Rescue Committee’s half-acre New Roots Community Farm. While Durrant knows that her efforts may not present a permanent solution to the problem of food insecurity, she believes that they can help empower communities who have grown accustomed to a chronic lack of agency in the food choices that they are able to make.

For many people, their involvement in urban gardening programs gives them the confidence they need to advocate for better food to be made permanently available in their communities. “I’m not saying that community gardens and urban farms can feed New York City,” she has remarked. “Please, it’s a city with over eight million people. But they can provide some relief. They give you access to grow the food you want. That’s where the food justice part comes in.”

You can stay updated on Durrant’s work by following her on Twitter, where she describes herself as an “accidental environmentalist.”

The acclaimed photojournalist Paul Hilton was originally born in Britain. His family relocated to Australia when he was very young, and by Hilton’s own account, his interest in helping endangered species was prompted by his nature-loving mother. Hilton said, “I remember when I was five, my mother wrote to the Australian government asking them to end commercial whaling. Then in 1978, Australia ceased all commercial whaling with the closure of its last whaling station. In 1979, Australia adopted an anti-whaling policy, permanently ending whaling in Australian waters. At the same time, Australia started to focus heavily on working towards the international protection and conservation of whales. That letter was a catalyst for me. It was a simple act with a powerful message.”

The power of Hilton’s photographs lies in his unique storytelling approach, which encourages viewers to empathise with the affected animals.

In the caption accompanying the photograph above, Hilton wrote: “A Sumatran elephant calf stumbles over a log. This subspecies of the Asian elephant is critically endangered, with less than 2000 across Sumatra, but only a few hundred in the Leuser Ecosystem.” One of Hilton’s recent initiatives has been the establishment of a GoFundMe page to support the protection of vital elephant habitat in the Leuser Ecosystem of Sumatra. Working in partnership with Wildlife Asia and Haka, he hopes to raise $200,000 Australian dollars to set up dedicated Elephant Patrol Units to protect these animals from poachers and ensure that they have a sustainable habitat range for years to come. At the time of writing, $100,987 has been raised.

Aph Ko is an independent digital media producer, a decolonial theorist and the founder of Black Vegans Rock. Along with her sister Syl Ko, she is the co-author of Aphro-ism: Essays on Pop Culture, Feminism, and Black Veganism from Two Sisters. This book arose from a series of essays, articles and thought pieces that were originally published on the website aphro-ism.

In the book, Aph explained, “Aphro-ism began as a website that I decided to launch after being fatigued with guest blogging on websites that other people owned. I wanted to offer a space that was dynamic, that tackled the deep entanglements of oppression, and simultaneously offered ways of moving closer toward liberation without privileging page clicks or compromising the analysis for vapid visibility. As a person of color who holds decolonial sensibilities, I felt like I didn’t really fit into any movement at all; therefore, I knew that I needed to carve out my own space.” She decided on the name “aphro-ism” because it sounded like “aphorism”, which means “truth.” Her website is aphko.com.

Even at a very young age, those who are sufficiently passionate and dedicated about their causes can make a difference. One child who has taken some incredible steps to tackle the planet’s plastic pollution crisis is an eight-year-old named Ryan Hickman, who lives in Orange County, California. 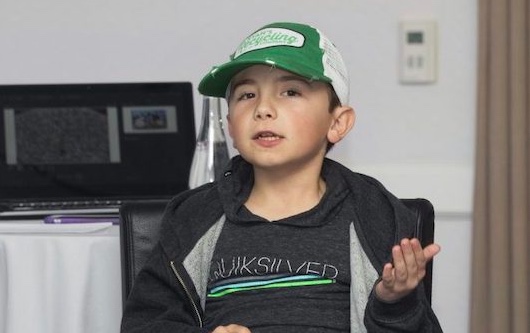 Ryan is the founder of a company called Ryan’s Recycling. His enthusiasm for recycling began at the age of three, when he began to accompany his father to the local recycling centre. Observing that more could be done to promote recycling in his community, Ryan informed his parents that he wanted to give empty bags to all of his neighbours, so that they could save all of their empty bottles and cans, and he could then bring them down to the recycling centre. Today, Ryan has customers all over Orange County. He sets aside a portion of his time each week to sorting through recyclable items for customers and readying them to be taken to the recycling centre.
Since 2012, he has appeared on a wide variety of television programmes, including the Ellen DeGeneres Show.

Sixteen-year-old Hannah Testa is another environmental activist who has done a lot of work to raise awareness about plastic pollution. Hannah lives in the U.S. state of Georgia. She was passionate about helping the planet from an early age, setting up the environmental advocacy organisation Hannah4Change in 2014. 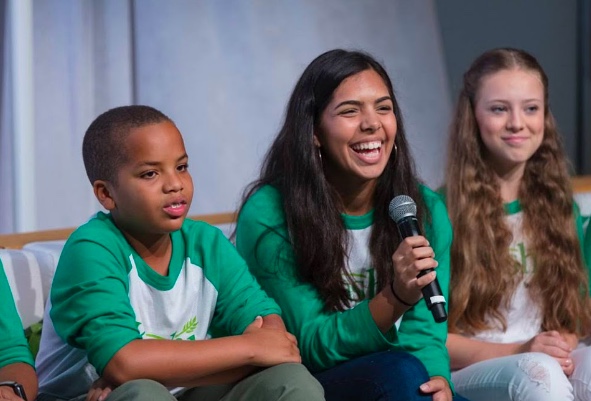 In 2017, she succeeded in working together with Senators for Georgia to declare February the 15th an annual Plastic Pollution Awareness Day in the state. The aim behind this day is to help educate Georgians on the various problems caused by plastic pollution, as well as offer guidance on how they can take steps to minimise the amount of plastic they consume. She also advocates on behalf of endangered animals.

She has said: “You need to realise that you are never too young or too old to make a difference. If you dream it and believe it, you are halfway there. So just go out and try something, you’ll likely succeed. With the internet and social media, there are many effective ways to make your voice heard. As consumers, we all have voices, and we can all make a difference in our own way. If we band together across the world, we can be unstoppable. We just need to care enough to act.”

Christopher Sebastian, also known as Christopher Sebastian McJetters, is well-known within the field of vegan activism and academia for his in-depth examinations of the complex relationships between speciesism, racism, and LGBTQA+ oppression. He regularly contributes to the blog Striving With Systems, if you would like to read his writings there. He is an adjunct lecturer at Columbia University. 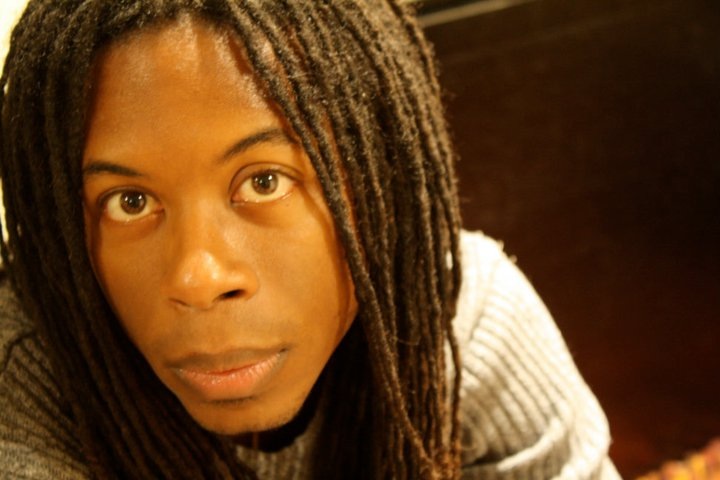 In a powerful talk he delivered at the university, he summarised his work thus:

The mainstream vegan movement usually focuses almost exclusively on the consumption of animals’ bodies. I want to talk about the psychology that goes into why we do this, the way that we do this and the ways that animal violence and exploitation manifests itself outside of our food system. What we do to other animals informs how we treat one another on this planet, and it is always — always — someone who doesn’t have institutional power, and they’re usually brown. The commonality of [black people and animal] oppression under the scope of white supremacy … does not mean it is making a comparison; it is the fact that whiteness has analysed us and decided that we are not worthy of our individual selves and our individual bodily autonomy and that we get to be objectified and used. Both of us, black people and animals.

Melati and Isabel Wijsen are two teenage sisters who live in Bali, Indonesia, and attend an eco-conscious school known as the Green School. The Green School is, by all accounts, a remarkable place: one that aims to draw out children’s innate creativity and problem-solving abilities, while helping them to develop a sense of appreciation for the natural world. It was here that Melati and Isabel’s passion for environmental advocacy was born.

In 2013, Melati and Isabel set up a company called Bye Bye Plastic Bags … when they were just 10 and 12 years old, respectively. The company’s work includes organising awareness and fundraising events, co-ordinating beach clean-up days, and encouraging local groups to create bags using alternative materials. The sisters have explained that at the time of Bye Bye Plastic Bags’ creation, only five percent of plastic bags in Bali were recycled. The rest were either incinerated or left to pollute the island’s beaches and waterways. Luckily, the sisters managed to convince the governor of Bali to ban plastic bags on the island by 2018!

You can watch the sisters’ eleven-minute TED talk below.