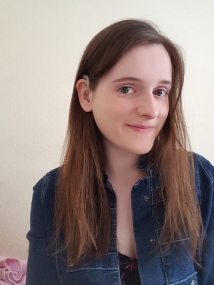 I don’t think I have ever previously discussed my hearing aids, or my hearing disability more generally, on this blog. The devices have been an intrinsic part of my everyday life ever since I was diagnosed with hearing loss as a child. They seem utterly normal – even boring – to me, so I don’t feel the need to discuss them very often. As I sit here, though, reflecting on my early years in the education system, it would be remiss of me not to mention them.

I have three different settings on my hearing aids, each one designed for different scenarios: hearing something from a distance; hearing conversations more effectively in a crowded room or a bar (in which case the hearing aids aim to muffle distant noises, so that I can focus solely on sounds that are in my immediate vicinity); and picking up sound from electrical loop systems in cinemas, theatres, or other performance venues (where those venues happen to have loop systems fitted). The third one is the best overall setting, as it enables me to hear the most, and is therefore the one I use the most often. The only drawback with this setting is that its sensitivity to electrical noises can be a little overwhelming. Whenever I’m too close to tram lines, telephone poles, or even certain types of light bulbs, my hearing aids pick up a shrill, deeply unpleasant whine, and I have to quickly change the setting. 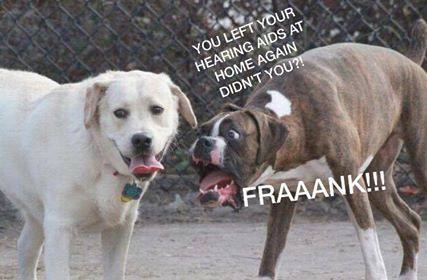 I am deeply grateful to live in an era where the needs of people who are hard of hearing can be met through devices such as my hearing aids. I love being able to enjoy music, hear my friends’ and family’s voices, and listen to birdsong in the mornings. These simple pleasures mean a lot to me when I know that if I simply removed my hearing aids, they would immediately become inaccessible. Even though I do mishear things a lot – and find myself saying “what” or pretending to have heard someone more often than I would like – I greatly appreciate everything I am able to hear.

With all of that being said, I used to get into endless trouble during my early years of primary school for turning off my hearing aids – silencing everything around me – whenever I deemed the teacher to be too boring. I was always a voracious reader: the amount of reading material that was given to us during class was never enough for me, and I was often scolded for having read too far ahead of where we were supposed to be in our English books. I had the same problem with my History textbooks, as I was continually enthralled by the dramatic events they described, and eager to learn what had happened next.

In the face of my teachers’ annoyance, however, I decided that if I wasn’t allowed to read ahead in my assigned books, I would start bringing in my own extracurricular books from home and reading them instead. I was particularly drawn to books about mythology, wildlife and the wonders of nature, and the novels of Tom McCaughren and Don Conroy were firm favourites. I used to sit back, flick off my hearing aids, and have a great time learning all about the ancient myths of Ireland, or about kestrels, owls, foxes and other wonderful creatures … absolute bliss. Or at least, it was absolute bliss until the teacher would call on me, I would belatedly realise that everyone in the class was staring in my general direction, and I would then have to endure the gut-churning embarrassment of turning my hearing aids back on, putting away my cherished book, and scrambling to figure out what had just happened. I soon realised that I had to stop turning off my hearing aids, as it enraged my teachers too much, but I continued to sneakily read my contraband books during class, whenever I thought I could get away with it.

I was far from cheeky or sure of myself in other areas, however.

I follow the Irish Times journalist Róisín Ingle on Twitter, and she recently retweeted an illuminating thread on dyscalculia by Leanne Woodfull, which shed an unexpected light on the difficulties I had with maths as a child.

I was diagnosed with dyscalculia in primary school and received help for it but in secondary, I was merely shoved aside. It’s caused me so much upset and anxiety over the years. I struggle with it daily and wish I’d received more guidance and help in my teens! https://t.co/yIcn79aPUK

Leanne’s description of her earliest memories of school broke my heart:

My earliest school memory is from senior infants. Everyone was going up to the teacher with their completed (correct) sums. I went up two to three times. Each time, I was wrong, and I recall sitting down at my table and bawling crying over why I couldn’t understand the numbers in front of me.

That scene played out over and over again for me when I was in primary school. When it came to dealing with numbers, I was frequently paralysed by a feeling of utter hopelessness, believing that I would never understand what was being asked of me, and that I would always be woefully behind everyone else in my class. While I felt comfortable enough to completely tune out during English or History classes – going so far as to switch off my hearing aids and get stuck into a good book – Maths classes were a source of enormous stress for me, as I knew that I would end up feeling stupid and incapable at some point. 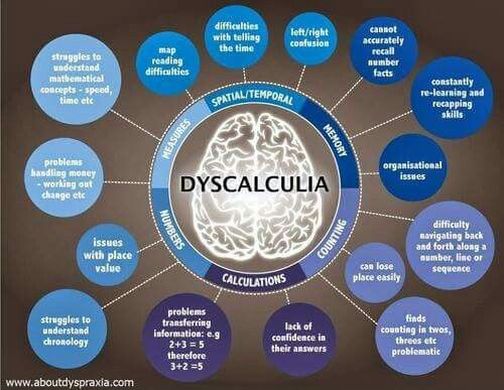 As part of her Twitter thread on the subject, Leanne shared an infographic stating that another symptom of dyscalculia is difficulty in differentiating between left and right. This was also a major problem for me as a child. At the age of eight, I decided that I would tackle it by wearing colour-coded hair bands on my wrists: lilac on my left, and red on my right. L for left, R for right, L for left, R for right … I can vividly recall repeating this mantra to myself every time I looked down at my wrists. I wore those hair bands for months – removing them only when I needed to shower, swim or sleep – until I was confident that I finally knew my left and right by heart. Even now, when tourists ask me for directions and I’m put on the spot to answer them, I often hesitate for a fraction of a second before the correct information slots into place and I know I’m not about to get the poor people hopelessly lost. 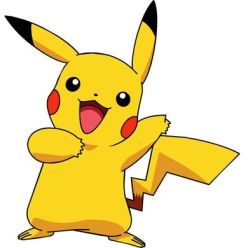 A great deal of the credit for my improved aptitude for numerical equations goes to my Dad (a former maths teacher), who came up with a simple but brilliant trick for helping me. I was obsessed with Pokémon in the late 90s – just like every other child I knew – so when I was struggling to get to grips with my multiplication tables, he got me to memorise the answers by associating them with the corresponding Pokémon, as listed by their Pokédex index numbers. Whenever he asked me what 8 x 6 was, for example, I thought of Venonat (#48 on the Pokédex system), and if he asked what 5 x 5 was, I could bring the wonderful Pikachu (#25) to mind. There were 150 Pokémon at that time, and the highest multiplication table I learned was 12 x 12 = 144 (the ever-majestic Articuno, of course. I stopped following the Pokémon universe soon after the third generation was unleashed and I have no clue who all of the new ones are, but I still know many of the original 150 by heart 😉).

Dad’s strategy really was ingenious because it meant that instead of having to deal with scary numbers, I could think about something I enjoyed. I slowly overcame my sense of sheer panic, which in turn meant that my brain no longer froze when faced with an equation. I could finally understand not just what the correct answer was, but crucially, why that answer was correct. I was able to look at an equation like 12 x 12, for instance – a terrifyingly abstract set of numbers which had previously intimidated me – and see that if it was applied to a real-life situation, it would simply mean that if I saw twelve bunches of roses, each of which contained twelve individual flowers, the question being posed by the equation was: how many are there in total? It sounds so obvious, but in my panic-addled state, I had never been able to see things in that way before. 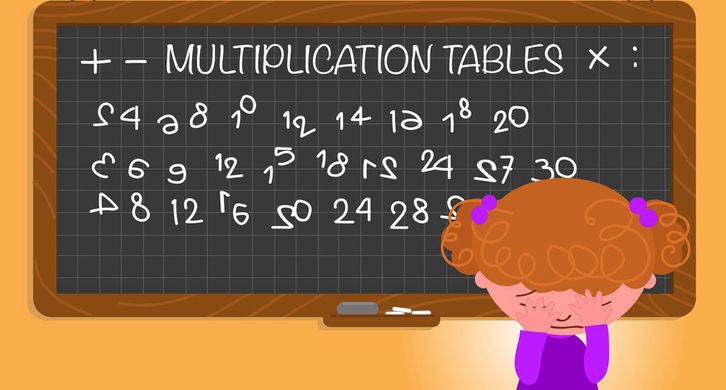 To me, maths classes had always been associated with tears, terror, and a sense of utter helplessness and fatalism. I fully believed that I would never, ever be able to understand what was being asked of me, no matter how hard I tried, so this newfound ability to visualise how mathematical equations could be applied to real life came as a revelation. It was the key to overcoming my abject terror of numbers, and it was made possible because of my Dad’s idea of getting me to associate them with something I actually enjoyed.

My problems with numbers and directions are far less severe than they were when I was a child, which may be an indication that I didn’t actually have dyscalculia. From what I understand of dyscalculia, it is a lifelong condition that doesn’t simply go away. However, I deeply resonated with many things that Leanne said. The condition is chronically under-diagnosed: according to a study carried out by the psychology department of Queen’s University Belfast, people with dyslexia are 100 times more likely to be diagnosed and appropriately treated than those with dyscalculia.

With that in mind, it is possible that I had a mild case of dyscalculia that was alleviated over time because of the tricks I employed to beat it … or perhaps I simply had some sort of mental block around maths. Either way, I’ve largely figured out how to minimise my number-related anxieties and I am very grateful for that. Even today, when I’m asked to perform some kind of calculation, I sometimes experience a brief flicker of panic before I begin. My fearful inner child – crying over her maths homework, utterly undone by her fear of it – hasn’t entirely disappeared, but I have learned that managing my emotional responses is crucial to dealing with numerical problems. I fully acknowledge that tiny moment of panic, but I don’t allow it to take over. A few soothing breaths usually do the trick in that regard!

Love them or loathe them, these feckers will always be a part of my life in some way! 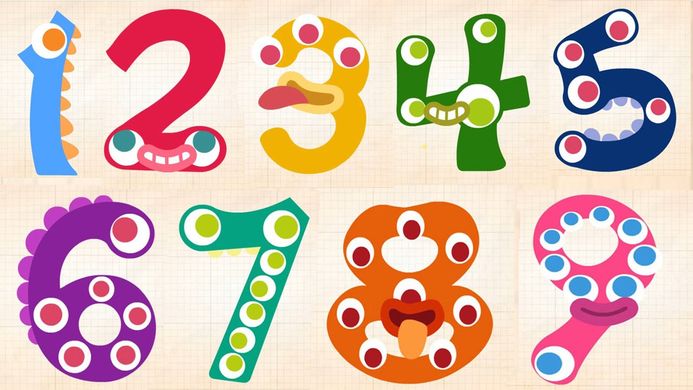